Our past concerts and performances

Immortals by Prahlad Mira Academy for Music and Arts

23 March 2017
The second concert organized by Prahlad Mira Academy for Music and Arts was held at the MLR Convention Center in South Bangalore and featured 3 hours of golden oldies from the Immortal musicians of Bollywood yester-years.

Romance – A Tribute to Kishore Kumar

10 December 2016
The maiden concert organized by Prahlad Mira Academy for Music and Arts featured 3 hours of romantic melodies by Kishore Kumar. The concert was held at Your School in South Bangalore.

14 August 2010
After over a year’s sabbatical, Zansam performed for Rotary on 14 August, 2010. The performance was to mark the felicitation of the out-going presidents of Rotary and ended with a 3-hour musical featuring the golden oldies of Hindi cinema music. 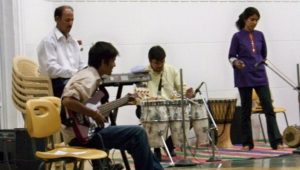 31 December 2008
Zansam performed at Ruppi’s Resort on the outskirts of Bangalore, on 31 December 2008, from 9 pm to 10:30 pm. The performance included some of the most foot tapping numbers from Hindi and Kannada cinema. 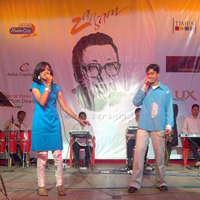 20 September ’08
Our second concert in Bangalore, “Pancham – A Musical Tribute”, was held on Saturday, 20 September ’08. The concert was a run-away success. We thank the audience for such an overwhelming feedback.

December ’07 & January ’08
Zansam takes a break with a few of the members studying for college exams.

11 November
Zansam performs at The Woodrose, a family club in South Bangalore. 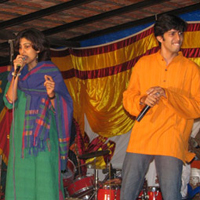 21 October 2007
A corporate show for NR Group, Bangalore, during their annual day celebrations. We were a part of a cultural evening that also included Indian classical recitals, bringing the crowd to their feet, dancing to Zansam’s music.

20 October 2007
Zansam pays tribute to the Indian Air Force (in its 75th year) on occasion of Durga Pooja at their Jalahalli base. (Show washed out due to incessant rains and flooding)

14 May 2007
The Patriarch’s charity show at Malleswaram Bangalore